Oct. 10, 2002.  Gene Mahoney asked me to write something about Kurt Cobain for the SFHerald (sfherald.com) so here goes: 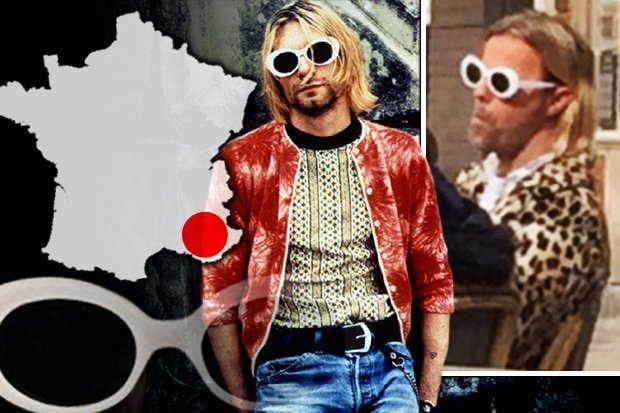 It was 1994 and I remember it as if it was 8 years ago. I had spent the previous 10 years sitting behind a drawing board hacking out my comic strip, so I was itching for some action. Plus, I always had this Rock’n’roll Dream thing in the back of my mind. This John Lennon-wannabe fantasy that I wanted to play out. Plus, I still had most of my hair back then, so the sky was the limit. But I was 37 years old and time was running out.

So I hooked up with these two young kids with recording equipment and musical know-how, Alex and Gannon. They were both about 20 and they kind of embodied the “perspiration/inspiration” aspect of geniushood. Gannon was kind of the grunt side of the equation; he had long, well-shampooed hair, parted on the side and flung over his forehead — he looked just like the lead singer of the Red Hot Chili Peppers. Black guys on the street of 50th and Telegraph where he lived would stop him and say, “Ain’t you that Red Hot Chili Peppers dude?” Gannon, too, had the Rock Star Dream, and, being a practical sort, he bought an 8-track reel-to-reel tape recorder and a bunch of other equipment and set up a home-recording studio in his apartment. He took recording classes at a local college. And he laboriously laid down sort of generic Heavy Metal tracks on his equipment. It was kind of funny seeing this raucous, wild, “out-of-control” Heavy Metal rock being meticulously created, step-by-step, laying down drum machines, and then power chords, and then vocals, etc. Gannon’s trip was sort of: Rock Star as Career Move. And he was methodically laying it down, step-by-step, on his way to the top (wherever that was).

Alex was the other side of the coin, with the quicksilver inspiration that people associate with genius. He LOOKED a lot like Kurt Cobain; straw blond hair parted in the middle, rock star skinny, with apple cheeks, and torn blue jeans. The classic Cool-Kid-From-High-School look that makes up the classic image of most rock stars. Alex even shared some of Kurt Cobain’s self-loathing; nothing Alex did was ever “good enough.” He had these impossibly high standards, and he might come up with 20 good ideas, but he’d abandon most of them before they got out of the germination stage because he was embarrassed that he hadn’t produced a work of genius yet.

And then there was me: I had my John Lennon-wannabe fantasy from way back when. Problem was I looked more like a cartoonist than a rock star, plus I had no musical talent (which was the least of my drawbacks considering what they were playing on the radio) so I was hedging my bets by latching on to these two kids who had Rock Star looks as well as musical talent. What I had was media connections; having built up a modicum of so-called fame through my cartooning career. And I knew everybody, and everybody knew me, in the limited world of Punk Rock that had spawned Kurt Cobain (the Big Thing of 1994) to superstardom. I had interviewed Johnny Rotten and Jello Biafra and Henry Rollins and knew all the record labels and rock magazine publishers, had been describes as “incendiary” by no less than CREEM magazine. So I was ready to rock, dude. I knew Larry Livermore at Lookout Records — he had published my comics in Lookout Magazine, so I figured if I could get something good on tape he’d put it out on Lookout Records. Livermore had just scored big with Green Day, which sprang out of the same punk milieu as Nirvana (and me). So it wasn’t like a pipe-dream; I was at that point just one small step removed from the so-called Big Time. I remember talking on the phone with Chris Applecore — the acting head of Lookout Records — right as Green Day was preparing to appear on “Saturday Night Live” to promote their number one record. And Applecore gave me good advice on where to get my CD pressed and where to get the cover art printed (the legendary Punx With Presses, which is a whole nother story).

Plus, the Grateful Dead were hitting the peak of their popularity, inexplicably, in 1994 (and what a long, strange trip it had been) with their brand of psychedelic street music, which I liked; as well as the peaking popularity of the Power Pop Punk of Nirvana and Green Day, which I also liked. So it seemed to be all coming together for me at that moment. If I could get something good on tape, all the other pieces were in place to really take off.

I had been publishing the TELEGRAPH STREET CALENDAR at the time, selling about 2,000 copies a year and getting featured on the Dan Rather CBS News and the front page  of the local papers. So I hit on the idea of recording a compilation CD of local street musicians, using the same format as the STREET CALENDAR, publishing a photo magazine of the  street freak musicians along with a CD of their music — you could see them and read about them, and also HEAR them. I felt my own music on its own wasn’t strong enough to go over, so I was hedging my bets. Little did I know how many other people shared the Rock’n’roll Dream; and every wannabe was now auditioning for me and harassing me and seeing me as the Last Desperate Hopes for their cherished dream. Crackheads from East Oakland that wanted to live out their Sly Stone dream. Suburban junkies that wanted to live out their Keith Richards dream. And me, gobbling down LSD by the handful as part of the Rock Star Accessory Kit that would turn me into a John Lennon type genius of my dreams.

Which brings us back to Alex, the cute blond boy, Kurt Cobain-wannabe with his rock’n’roll dream, who was the recording whiz behind the controls of this whole mad enterprise. These Rock Stars they really were Role Models for so many of us. I mean, we aspired to Be Them, or something. There was something fundamental about the whole deal; something very basic, where so many of our most basic premises of what we Wanted to Be, what we Wanted to Do with Our Lives, what we considered a Successful Life, what we were Striving Towards, seemed to stem from these Rock Stars. Or at least who we thought they were.

Anyway, it was April and I had managed to scrounge up a $5,000 grant to fund this whole mad enterprise. So I set up a big recording session in this boarded-up old bank on Shattuck Avenue. I gathered together all the recording equipment, and Alex and Gannon — the two recording geniuses — and all the streetfreak musicians who wanted their Moment in the Spotlight, and me, with my beat-up old guitar and supply of LSD, together in this building to record our great and future masterpiece of a CD. Christ, at that point I had never even BOUGHT a CD, let alone a CD player, and now I’m going to RECORD a CD. But I was Captain Trips Revisited, and if you take enough drugs, ANYTHING can make a certain sense. And don’t forget: I was a mere one step removed from Superstardom. I remember when those punk fukks in Green Day were just high school kids happy to get a gig at Gilman and play before 30 people at Gilman. And now there they were appearing on “Saturday Night Live” in front of the Whole World. So anything was possible.

Anyway, the night before the first big recording session, April 1994, I’m listening to the radio and I hear the news that Kurt Cobain — our role model, our guiding light, the Successful Rock Star, the man we aspired to be — had blown his fukking brains out.

The next day, I walk into the recording session that I had spent months setting up. Our big dream. There was cute blond boy Alex, with his torn blue jeans, who looks just like Kurt Cobain. 20 years old. Kurt Cobain is our Barometer of Success. He’s who we’re aspiring to be. Now, he, Kurt Cobain, is lying on a slab in a mortuary with half his brains blown out. I look at Alex, cute blond boy Kurt Cobain-wannabe, and he looks at me, 37-year-old acid head, John Lennon-wannabe, and it was a moment, as they say, that gave me pause. Cobain Himself had described his work, bitterly, as “nothing but recycled Lennon.” And now we were in the process of recycling Cobain recycling Lennon.

Anyway, I guess we all have a tendency to chase after false gods. And we all have those moments when we realize we were duped, that we’d been suckered, swindled, by some con-man, or maybe just betrayed by our own greed, weakness, vanity, ego, and/or foolishness. But lets just say The Great Rock’n’roll Dream didn’t look particularly great at that moment.