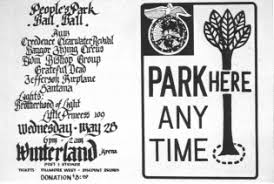 I’m gonna be 50 in a couple months, and I kinda’ feel like the rug has been pulled out from under me. The world I used to live in is gone. And yet, here I am, still walking around in it like a ghost. I came to Berkeley 30 years ago looking for the ’60s counterculture. But that’s long gone. For a while I was part of the Telegraph Avenue street scene; there was a bohemian magic to the scene for most of the ’90s. But now, there’s hardly anything left but a bunch of bums flopped out on the sidewalk.

I often say to myself: “I went from up-and-coming to down-and-out with no flowering period in between.” And that’s sort of the feeling. I still look at all the beautiful young girls who pass by, who used to dance around my world. But now I’m just a tired old man.  The young girls inspire feels of pathetic regret more than longing.

Yesterday, Sunday, was the People’s Park 37th Anniversary concert. It was a tired affair.  The same bands did the same ten songs they’ve been playing for the last 10 years. At the end of the Funky Nixons set, the singer called out to the throngs: “FUCK THE POLICE!”  The heroic battle cry of Berkeley’s fabled radical past. But it had all the impact of a bratty child repeating a dirty word for effect; not even shocking, just sort of: “Yeah, yeah, heard that one before…” Wavy Gravy was walking around amidst the sparse crowd dressed in his clown suit doing his tired act. He’s a gray, little old man  now. Wasn’t it just yesterday he was a young hippie heralding a Great New Day from the stage of Woodstock? Oh well. I guess we ate too much of the brown acid.

I stumbled across a flyer from a People’s Park benefit show from 37 years ago. I guess it was 1969, that fabled year. It was billed as “People’s Park Bail Ball.” I guess it was to help raise money for the Berkeley activists that got arrested in the great People’s Park Riots. Oh what exciting times they were. Topping the bill, believe it or not, were: The Grateful Dead, the Jefferson Airplane, Santana, Credence Clearwater Revival, Elvin Bishop, and others. And the price was — get this — $3. What, no Funky Nixons? Why, I wouldn’t pay more than $2.50 for a line-up like that. My, how times change. But the flyer was like a before-and-after picture of the People’s Park scene. What was then and what is now.

Tonight, Jane Fonda was appearing at Cody’s Books on the Ave plugging her latest book.  People were lined up in the store as she sat at a table signing books. People were looking at her and gawking and pointing and giggling like she was an exotic zoo animal for public inspection. Weird. “Its Jane Fonda! Can I pet her!”  She looked like a handsome, dull, glazed, well-preserved, middle-aged housewife. No Barbarella suit tonight. The people in the crowd were mostly graying, affluent-looking Boomers. I guess the Boomer Generation has done boomed. In Berkeley you’re doomed to endless succession of ’60s retreads coming to town to tell their exciting stories of those exciting days of the ’60s.  What exciting days they were.

I guess its all in how you look at it. Mostly, I look at it from a negative point of view.  Aside from these occasional exalted visions that take me all the way to heaven. But not tonight. Now I’m going back to the office and sip on a 16 ounce can of Old English malt liquor. And nurse my wounded pride.

One thought on “More Pathetic Whining from ol’ Ace Backwords”