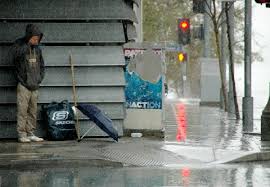 Decided to stop smoking pot for awhile, smoked up my last roach.  “That’s that,” I said.  Then this guy Lenny gives me a big dime bag of buds as a gift.   I can’t win even when I’m winning.

It rained non-stop all day yesterday.  I sat for hours last night at my old spot, my old corner at Cody’s Books under the awning.  Trapped by the relentless rain.  At first I was digging it.  The rain was  a great excuse to hang out at my old spot and drink several cans of Olde English malt liquor.  Plus, for once, nobody would be coming at me, bothering me, everybody else was running for cover to get out of the rain so the rain provided this real cozy coccoon.  I started having flashback memories of all the past scenes I ‘d had here from 1982 to 2009.  All the great and weird moments.  But after awhile the movies in my head ended and I returned to the present moment.  Sitting in a doorway, a homeless bum in the rain.  Periodically I would scream at the top of my lungs: “FUCK!!”  To blow off some steam.  That was an enjoyable release.  Plus, the sound was mostly drowned out by the battering pitter-patter sound of the relentless rain.  And plus, nobody was going to brave the rain to come over and tell me to shut the fuck up and stop screaming “Fuck.”  So I had a free pass.

Thats probably why Lenny — this aging homeless hippy potdealer —  on his own accord offered me a bunch of buds as I passed.  He was in the adjacent doorway and he probably heard me shouting “Fuck” and wanted to mellow me out.  I remember telling the blonde steet kid he was hanging with “I’m having a nervous breakdown,” and he gave me a nice hippy hug.  Its weird to get suddenly hugged by a stranger. But ya gotta take your kicks where you find them.  I gave Lenny $7 for the weed — he was being generous to me so I’m being generous to him, that bit.

“Get yourself something to drink,” I said.

“No, I mean get yourself a cup of coffee or something,” I said.

(See, Lenny the pothead was turning it into an anti-alcohol thing.  There’s this whole controversy on the streets, the drunks versus the stoners debate.)  (Don’t even get me started on the speedfreaks versus the crackheads debate.)  (Let alone the Grateful Dead versus Metallic debate.)

Then I staggered down the street with my sleeping bag and blanket in a garbage bag slung over my shoulder.  Staggered to my secret doorway on the campus which I’ve been using as my “rain crashspot” the last two winters.  Its an ingenious spot, right in the middle of the campus but perfectely hidden at a cul de sac. So bicycle cops never ride through and spot you.  Its the back entrance to the basement of this building.  So in the last two years there’s never been a person around when I’m crashing there.  I was congratulating myself last night on how clever I was to have found such a great crash spot.   Then this morning as I’m packing up to get out of there at 7 in the morning before anyone else shows up (always one step ahead of the fucks, me, Ace Backwords) a cop car goes cruising by just as I emerge from my spot. Did he see me? Fuck.  So much for that spot.  That’s life on  the streets.

One thought on “The Rain”