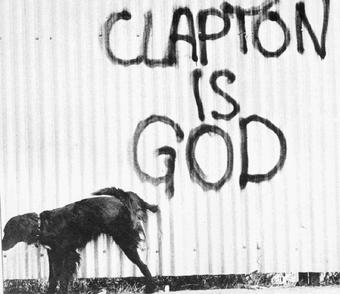 I have a list of probably four or five of the Worst concerts I ever went to. High on that list would be Eric Clapton in 1974.

I saw Clapton at this decaying old football stadium in the swamps of New Jersey.  I bought four tickets, but nobody wanted to go to the show (that should have told me something).  And when I got to the stadium I couldn’t scalp ’em.  So the night was off to a bad start.

Then we waited around for an hour for Clapton to come on stage.  People were starting to get restless and pissed off.  Scattered boos and cat-calls and beer cans hurled at the stage.  Finally, the announcer announces:  “LADIES AND GENTLEMEN, ERIC CLAPTON!!”  The crowd goes nuts.  Clapton and the band storm out onto the stage.  They immediately launch into their opening, rockin’ number.  But 20 seconds into the song, the whole song breaks down.  The band stops playing.  Apparently they can’t get it together. Or Clapton’s so fucked up that he can’t keep track of what he’s doing.  The band staggers backstage amidst much confusion.

About 30 minutes later, they all stagger back on stage.  Apparently Clapton has roused himself from whatever his problem was.  Drugs?  Drunk? Sickness?  Inadequate groupie service?  Who knows. They manage to grind through a dull, perfunctory, 40 minute set. And then they slither off stage in disgrace.  No encores.  To a chorus of boos.

Probably just a bad night. Because most of the other stuff on Youtube from 1974 that I perused, Clapton seems in pretty good form.

T. Rex is another one on my clunker list.  Always loved their records. But live?  Meh.  It was 1975 in a little club in Cleveland (which I guess was already a sign of their downward fortunes).  Mark Bolan was noted as a “glam rocker” kind of guy.   So I guess I was expecting a big, flashy stage show.  But at that point he just looked like a scruffy, disheveled, little hippie with a little bit of a pot belly.  Worst of all, his very cool singing voice on records was sort of bland, flat and tuneless live.  And the nice “groove” he got into on his records was most definitely a “rut” when you heard them live.  At least that night. It was just sort of mindless, middle-of-the-road boogie music. He had a black chick on keyboards. And you got the feeling that the only reason she was in the band was to sort of show:  “Hey-aren’t-I-cool-I-got-a-black-chick-in-my-band”  Or maybe she was his girlfriend.  But she didn’t seem to do much.  Bolan sort of staggered around the stage pointlessly, like he was drunk or bored or just going through the motions. One of those kind of shows.

For all I know, he killed it the next night (sometimes you just catch somebody on a bad night).  But I doubt it. . .   Shortly after the show, Mark Bolan died in a car crash.  I think he was drunk and hit a tree or something.  That’s show business for you!

Another disappointing show was Paul McCartney in San Francisco, 2010.  But it wasn’t because of McCartney but because the allegedly “street smart” Ace Backwords fell for one of the oldest tricks in the book.  “A deal that was too good to be true.” And it was.     https://acidheroes.wordpress.com/2010/07/12/ace-backwords-goes-to-the-paul-mccartney-show/

But aside from those three concerts I can’t think of any other particularly disappointing concerts.  Out of the hundreds and hundreds of live shows I’ve went to.  I don’t know if I’ve just been lucky.  Or if I’m just easily amused . . .   Todd Rundgren and Utopia at Winterland in 1977 was a bit of a dud.  They weren’t bad.  But they played every song virtually a note-for-note copy from the album.  Flawlessly.  But I thought:  “I could have just stayed home and listened to the album and saved myself 20 bucks.”

7 thoughts on “The worst concert I ever went to”