POPISM: The Warhol ’60s by Andy Warhol is literally a year-by-year account of Warhol’s experiences in the ’60s, starting with 1960 and ending with 1969.  It’s also an interesting history of how America’s cultural mores evolved (or is it devolved?) during that seminal decade.  As well as a fascinating behind-the-scenes account of how Warhol’s art career developed turning that period.  (He started the decade constantly asking his friends, “Do you think Picasso has heard of me?”  And ended the decade as an international sensation who would be mobbed like a rock star at art gallery openings.)

The “soul-less zombie” rap came from a certain bloodless quality Andy Warhol had.  Or, as Warhol put it, “Now and then someone would accuse me of being evil — of letting people destroy themselves while I watched, just so I could film them and tape-record them.”

Warhol had this weird quality where he’d get more demonstrative over the  latest gossip (“Did you hear what so-and-so SAID about so-and-so!!!”) than he would about the news of one of his latest Superstars committing suicide (which he’d usually just shrug off with a pithy one-liner and then never mention them again).  TO be fair, Warhol displayed the same nonchalant attitude towards his own suffering.  When he was in the hospital recovering from a near-fatal shooting, he said, “I was very moved to see that people cared about me so much, but I just tried to get everything back to a light, gossipy level as quick as possible.”  So who knows if Warhol’s seeming indifference towards the suffering of the people around him was a sign of cold-bloodedness. Or just a coping mechanism to detach himself from suffering in general.

Let’s just say, there was a reason people called him Drella. (“‘Drella’ was a nick-name somebody had given me that stuck more than I wanted it to, they said it came from combining Dracula and Cinderella,” he explained.)

People often speculated on how much of Warhol’s act was for real, and how much of it was a put-on.  Who was the REAL Andy Warhol, after all?  I suspect his act was basically who he was.  But he no doubt exaggerated and camped up certain aspects of it.

One part of his act that was probably fake was his “innocent, naïve, star-struck waif who was just stumbling through his life” façade.  In fact, Andy Warhol was a guy with a great amount of “functional intelligence.”  He was one of those guys who could walk into any room and instantly sum up the situation correctly.   He was one sharp dude.  And as for being “naïve.”  Try getting some money off of him (and good luck with that).

One of his famous quotes was:  “If you want to know all about Andy Warhol just look at the surface, of my paintings and films and me, and there I am.  There’s nothing behind it.”  And, like so many of his quotes, it was clever, funny, thought-provoking and completely false.  In fact, Andy Warhol was a highly conceptual artist who’s primary concept was to pretend that there was no concept to it.  Ha ha.  And he was savy enough to know that by projecting no meaning himself onto his artwork and his life, that allowed his audience to use his work like a Rorschach Ink Blot and project any meaning they wanted onto it.

Warhol constantly played up the idea that human life in human society was mostly an act, a form of role-playing.  Life is a stage.  Therefore, the ones who admit they’re fake are the most real.  Ironically enough. (I think that’s why he liked drag queens)  Life is nothing more than a really weird movie.  And the only 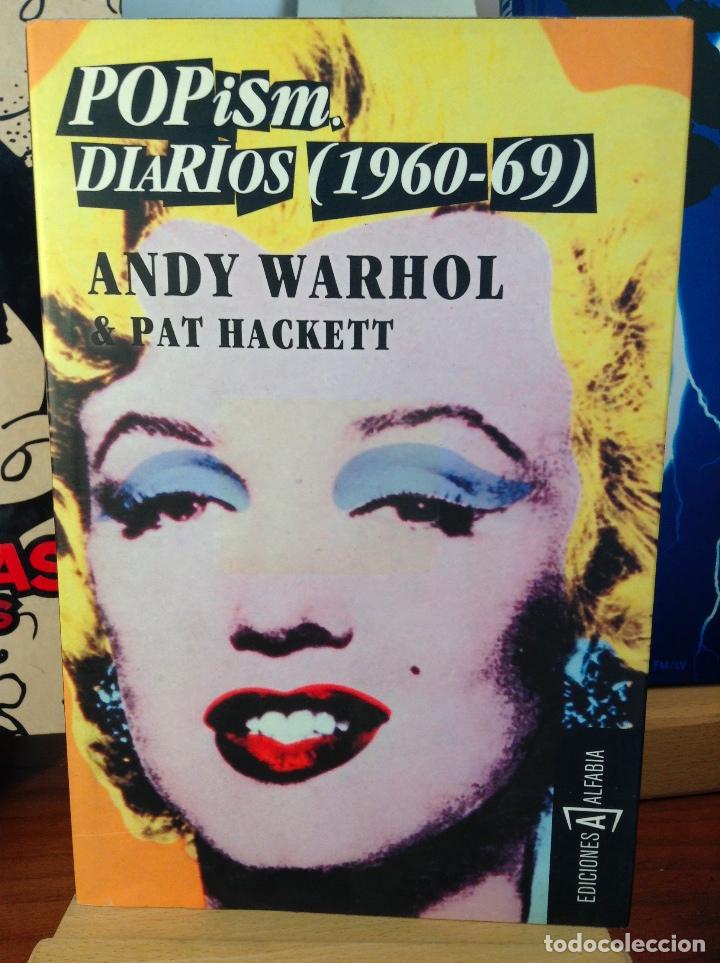 important thing is that you put on an entertaining show (the worst put-down in the Warhol circle was that you were “corny”).  Humans were merely a collection of masks.  One mask on top of another mask on top of another mask.  All that mattered in the Warhol scene was constructing a cool mask.  Everything was on the “surface,” after all, as Warhol put it.  Warhol rarely speculated as to what, if anything, might be behind our masks.  Which was probably the weakest aspect of Warhol’s world-view.

Like most people, I have my own personal standard as to who I consider a great artist.  And one of my standards is:  They have to do it more than once.  Anyone can get lucky and be in the right place at the right time and be a one-hit wonder.  But Andy Warhol did it repeatedly.  And in different mediums.  Having his first big hit with his Pop Art paintings — the Campbell soup cans and all of that.  And then he did it again with his underground films and the whole bizarre Factory scene.  And then he did again with his collaboration with Lou Reed and the Velvet Underground (Warhol personally paid for the recording sessions for their first classic album).  And then again in the ’70s with his unique spin on fame and celebrity and the jet-set crowd with his INTERVIEW magazine.

I was always fascinated with the whole Factory scene in the ’60s.  The artists, the bohemians, the creativity; rubbing shoulders with the street scene, the druggies and the crazies.  It reminded me a lot of the Berkeley street scene we had going in the ’90s; the Telegraph street scene and the Hate Man’s Hate Camp scene in particular.  Though, if anything, we were even more wild than the Factory scene.  For we were right out there on the streets which was completely free-form and unsupervised.  As opposed to the Factory scene which at least took place in a building and had a certain structure to it.

Probably the most endearing thing about Andy Warhol was his sense of fun, his sense of play.  When you look at those photos of Warhol working with his assistants on  some huge canvas on the floor of the Factory, you get this image of little children playing together with their crayons.  And his movies, for all their decadence, were like little children play-acting.  “Let’s play pretend!”  And even the sex aspect, which seemed so shocking in the ’60s, looks more like a pajama party today.

.
One of the many odd things about Andy Warhol:  After he died (at age 58) they went to his house to figure out what to do with all of his stuff.  And they were shocked to find that virtually every room in his four-level house was crammed from floor-to-ceiling with boxes and boxes of stuff that he had bought over the years.  Almost all of the stuff had never even been taken out of the packages.  They were sitting their in their original bags with the receipts, un-touched.  His entire house was crammed with this stuff.  In every room.  Stuff he had bought and never even used.  His house was more like a storage locker than a home.  It took them MONTHS just to inventory all the stuff.  Weird.  Andy Warhol.

One thought on “POPISM: THE WARHOL ’60S: A book review”