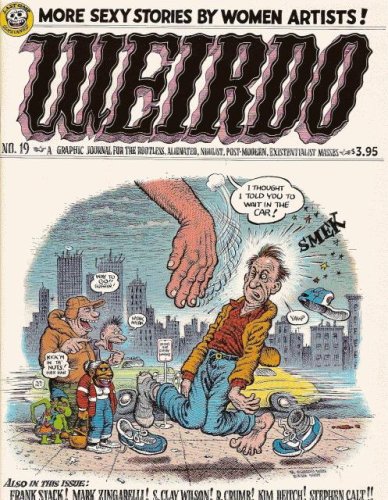 Somebody just sent me a Youtube video of R. Crumb being interviewed at Last Gasp about his WEIRDO comic book.  And the interviewer asks:  “Robert, who were the most trouble, the most crazy, out-there artists that you worked with?”

Of course ole’ Ace Backwords made the top three. Ha ha. And I’m sure there was a lot of competition for that honor.  “Ace Backwords actually threatened to sue Aline,” said Crumb with a laugh.

For the record, here’s the story on that one:

I had submitted some cartoons to WEIRDO. And Aline (Crumb’s wife for those of you keeping score at home), who was the editor at the time, wrote back and said she wanted to publish this one-page cartoon I had sent. But she needed a better quality copy. The thing was actually four different comic strips that I had xeroxed and then copied onto another page.  So it was a copy of a copy of a copy. The print quality, of course wasn’t good enough for a truly genius-level publication, such as, say, RAW (who demanded first-generation zipatone from all their cartoonists).  But it was certainly good enough for something like WEIRDO. Ha ha.

But what the heck. It was an honor to get into WEIRDO.  Plus their pay-rate was something like 50 bucks a page, and I needed the 50 bucks. So I went to the trouble of digging up the four original comic strips, making high-quality xeroxes of them, cutting them out, and laying them out on another piece of paper, and then mailing it off to ole’ Aline at WEIRDO Global H.Q. in Winters, California.

But then when the issue of WEIRDO came out — to my chagrin — my cartoon wasn’t in the issue. So I wrote Aline asking what happened.  She didn’t write me back. So I wrote a second letter.  And she still didn’t write me back.  So after about 4 or 5 months I started to get a little irked. So I decided to punch through her crust. I wrote a third letter where I told her I was considering taking her to small claims court.  I mean, after all, she had hired me to do a job.  I had done the job. And then, not only didn’t she pay me for the work I had done, she didn’t even bother to give me an explanation. So I was willing to take my case all the way to the Supreme Court, if need be, to recoup my $50 in lost wages (along with possibly an additional $2.8 million in damages for the mental anguish and duress that I had suffered, as well as the damage that this incident had done to my career, my reputation, and my public image, your Honor).

Well, that got Aline’s attention.  And she immediately wrote back apologizing to me.  Which is all I really wanted.  Of course I was never actually going to take her to court.  Are you kidding?  The only way you could get me into a courtroom is in handcuffs. I just don’t like it when somebody blows me off.  And very few people have gotten away with blowing me off. Not even the great Aline Kominksy Crumb. Ha ha.