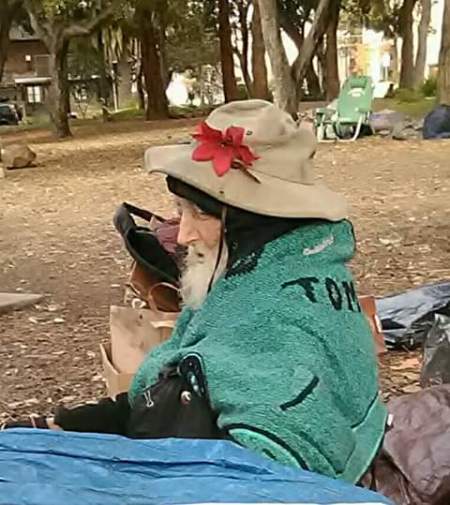 Hate Man has been struggling quite a bit lately. He’s 80 years old. He’s having health problems (problems breathing). And a massive rainstorm is heading our way tonight. Plus, the cops are on his case. And he’s surrounded by street crazies fucking with him.

“Last night I set up all my camping stuff on Bowditch Street,” said Hate Man. “But when I came back this morning all my stuff was gone! Including my 8 garbage bags of recycling! At first I thought the cops had hauled it away. And now I’m completely fucked. The big storm coming in tonight and all my blankets and tarps are gone.”

“What happened to all your stuff?” I asked.

“It turned out Sunshine (this crazy tweaker chick) had hauled off all my stuff and dumped it in a garbage can.”

“Well I’m sure she had a reason. But it was probably a completely insane reason that made sense to nobody but her.”

“Yeah. But at least I managed to track down all my stuff. And now I’m struggling to get it all set up again before the rain starts pouring down.”

But here’s the kicker. Amidst dealing with dozens of dire issues Hate Man pauses amidst his travails and says:

“Oh. This guy dropped off a bunch of cans of Vienna Sausages for me. But I don’t want them. You can have them if you want (Hate Man knows my feral cats love Vienna Sausages).”

Hate Man digs out the bag of Vienna Sausages from the jumbled mess that is his campsite. Gives them to me. And then goes back to the task of trying to organize his campsite before the big storm hits.

Hate Man is kind of the epitome of the concept of “grace under pressure.”

One thought on “On this date last year: Grace under pressure. The kind of stuff Hate Man was dealing with during his last months on the planet”