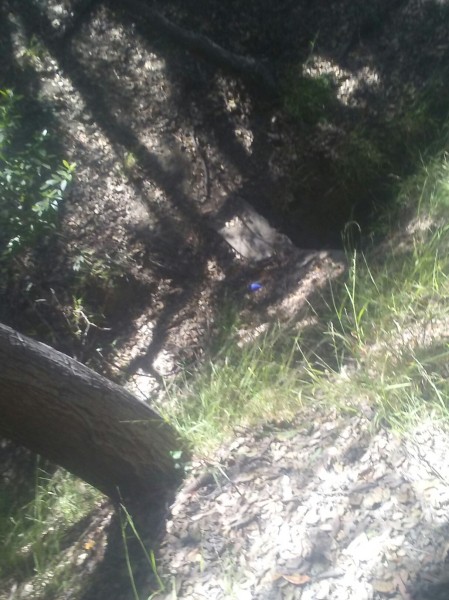 I friend of mine recently fell down, fractured her hip, and had a steel pole put in her thigh. That got us thinking about some of the falls we’ve taken over the years. And i remembered one particular goofy fall.

Needless to say, I’ve had many years of experience falling down. And the secret to falling is to not fight it. If you tense up, that’s when you get hurt. You just have to accept that you’ve lost the battle with the Laws of Gravity, and just go with the flow.

Now, considering that i camp in the Berkeley hills every night, its a miracle I haven’t broken my neck. I usually get up there well after midnight, drunk out of my mind, and its nearly pitch-dark. Plus, the terrain is particularly steep and difficult to navigate — even sober during the daylight — and during the rainy season, the mud and the wet leaves can be slippery as ice (I’ve splattered head-first into the mud more than once).

This friend of mine once saw this deer — a fairly sure-foot creature — lose her footing in the Berkeley hills and fall straight down the hill. She went end-over-end, somersaulting all the way down, broke her neck, and was probably dead before she came to a halt. So those hills can be treacherous.

Anyways, one night I’m staggering up to my campsight well after midnight. And when I bent down to pick up the big piece of cardboard that I keep stashed behind this tree, all the alcohol-soaked blood rushed to my head, causing me to lose my balance. And I toppled over, face-forward and slid down the hill.

Fortunately, I was holding the cardboard up to my chest, and I actually slid smoothly down the hill like I was riding a toboggan. Until I came to the bottom of the hill and crashed into the creek. Which at least was dry at the time.

But now the problem was, I was wedged into this cramped spot in the creek, and it was a steep incline that I was trapped in, and the dirt and rocks of the creek-bed kept shifting under my feet every time I tried to pull myself out of the creek. Plus, it was pitch-dark and I was still way drunk. I made 5 or 6 heroic attempts to pull myself to an upright position, falling straight back down every time. Finally I concluded the situation was hopeless.

But then it occurred to me: I had my cardboard matting. And I was carrying my sleeping bag. So why don’t I just sleep right there in the goddamn creek?

And that’s what I did. It was actually kind of cozy, and I slept peacefully and comfortably all night. Until around 4 in the morning when I was awoken by the sound of my feral cats. They were all circling around me, and meowing loudly. Meows that no doubt translated into English as: “WHAT THE HELL ARE YOU DOING SLEEPING DOWN THERE IN THAT DITCH, YOU STUPID IDIOT WHEN YOU SHOULD BE UP AT YOUR CAMPSITE FEEDING US OUR GODDAMN SUPPER??”

They had a point By that time I was semi-sober enough, and it was light enough, that I was able to maintain an upright position and extricate myself from that goddamn ditch. And I made it back to my campsite, and fed my goddamn feral cats, and we all lived happily ever after. THE END