This morning I did this ritual I’ve done many times over the years. Cleaning up somebody’s abandoned campsite in the Berkeley hills.

This one was a mysterious one. Last year these guys hauled up enough camping gear to last for years. Everything but the proverbial kitchen sink (actually they DID have this portable wash tub). But then they were almost NEVER there. I only talked to them once, briefly, the whole time. It seemed bizarre that they would set up this elaborate camping set-up and then rarely use it (I speculated they might have been using it for some kind of marijuana processing operation or something more shady).

Anyways I figured I better take care of it today before the rains start coming in. Because it’s a real mess to try and clean up a muddy, wet, mildewy pile of crap.

I don’t know if you can tell from the photo but the terrain is pretty treacherous. It’s very steep. One mis-step and you’ll fall 30, 40 yards. And you won’t STOP falling until you hit the dry creek below. They had leveled just enough land for a two-man tent and that was about it.

It took me two hours to pack up all the crap (the photo only shows part of the mess). And then the real pain in the ass — hauling it all down the road to several garbage cans. By the time I was done I was soaked with sweat and cursing the gods. It’s a chore. But it’s made tolerable by the wonderful realization that these bums would never be gracing my neck of the woods ever again. And amen to that. 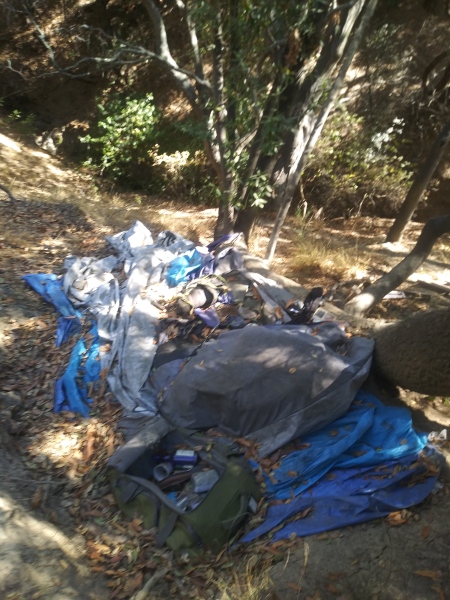