Whenever a Peter Frampton song happens to pop up on the radio or the internet, it’s like I have an acid flashback to 1976. I was 19 and driving cross-country from New Jersey to California to be a hippie (that was the plan). I had this bomb of a ’69 Chevy that spewed a thick black cloud of exhaust for 3,000 miles. And an AM-FM radio that played all the hits of the day. And Peter Frampton was one of the guys who’s songs regularly popped up on my radio (the other songs I remember was “Dream On” by Aerosmith, “Dream Weaver” by Gary Wright, and the hated “Take It to the Limits” by the Eagles).

When I got to San Francisco, Peter Frampton was on the cover of ROLLING STONE that month. He was like the mega-star of the moment. And his live album was selling zillions of copies and setting records. So it was like Peter Frampton was “it” in 1976 (though not for long).

Anyways one of my big dreams at the time was to become an underground cartoonist. So I rented out this little room in this flophouse, the Empress Hotel (I think the rent was $15 a week) deep in the heart of San Francisco’s Tenderloin district. And there was a little desk and a chair and I had my art tablet and my pens and pencils. And I worked on various comic strips that I hoped would bring me fame and fortune.

And one of the comics I was working on was this parody character FramptonMan — Peter Frampton as this do-gooder, crime-fightin’ superhero (I was hoping to cash in on the latest trends — pretty smart, huh?). And FramptonMan’s arch-enemy was the Stones Gang. Mick and Keith and the rest of the Rolling Stones as this underworld crime gang. In the first episode of my FramptonMan comic, Donny and Marie Osmond are doing their TV show and the Stones Gang bursts onto the stage with their electric guitars and executes Donny and Marie with heavy metal power chords on live TV. And that’s as far as I got with my FramptonMan cartoon. Thank God. 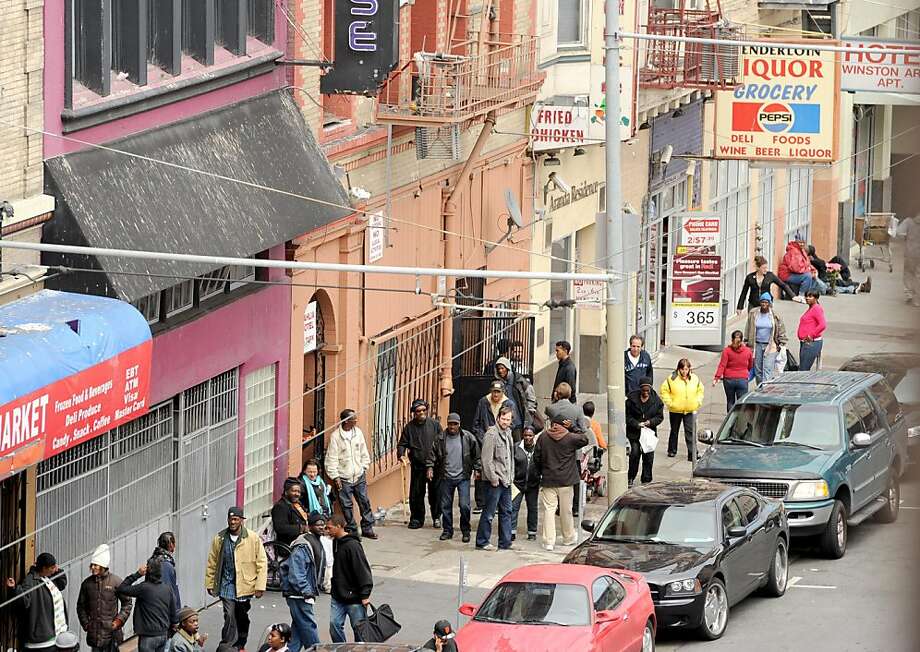 So anyways one night I’m heading back to my room on the 3rd floor of the Empress Hotel. And as I’m walking down the hallway I passed these black guys who had been loitering around in the hallway. . And suddenly they all turned and run after. So I put it in high gear and went sprinting down the hallway towards my hotel room as fast as I could. I rushed into my room, and slammed the door shut. Only one of the guys managed to stick his foot in the doorway and wedge it in there before I could get the damn door shut. So now I’m pushing on the door to try and shut it. And they’re pushing on the door to try and open it. Like this crazy tug-of-war.

Finally they managed to over-power me and flood into my room. So now I’m suddenly dealing with that.

The guy with the knife had a crazed, wide-eyed expression on his face and he’s sweating like crazy and he keeps ranting about how “MY GIRLFRIEND HAD JUST BEEN KILLED BY A MOTHERFUCKING WHITE GUY!!” I think that was his justification for killing me. So I was realizing that I could be killed at any moment.

The weird thing was — I don’t know if you’ve ever been in a situation like that but — I wasn’t feeling any fear. It wasn’t that I was so brave. But that the scene was so bizarre and sudden and unexpected that my brain couldn’t even process what was happening. Like being in a state of shock. Meanwhile the other guys are rifling through my meager possessions for anything they could steal. While the other guy is contemplating whether or not he should slice my fool head off (and I could tell that part of him very much wanted to do that).

I remember at one point I actually had an out-of-body experience. It was like I rose to the ceiling of my room and I was looking down, dispassionately, at the whole crazy scene from that perspective. And then, for lack of anything better to do, I said to the guy with the knife: “Listen, can I show you something?”

I pointed to my desk. “That.” I said. I cautiously walked over to my desk and picked up the piece of paper with the cartoon I was working on at the time. The FramptonMan cartoon. And I picked it up and held it in front of me sort of like a shield and said: “I just want to draw cartoons.” I guess it was my way of trying to appeal to our common humanity. He looked at the Frampton Man cartoon with anger and perplexion. And so we were all frozen in time and space for several moments like that. Until one of the other guys said:

The guy with the knife paused for a beat, like he was still debating the merits of to kill or not to kill. And then they all went rushing out the door and down the hall. And I breathed the biggest sigh of relief I had ever breathed, like, WHOOSH!!!

The weird thing is, of the stuff of mine they stole — a couple of bucks, my knife, a cheap radio — the only real thing of value I had was this really nice $100 down sleeping bag. And they didn’t bother to steal that.

And the other take-away was, from then on I NEVER used a knife to sharpen my pencils. I always used a little pencil-sharpener after that. And whenever I happen to hear a Frampton song on the radio or the internet I’ll remember that whole scene in the back of my mind.