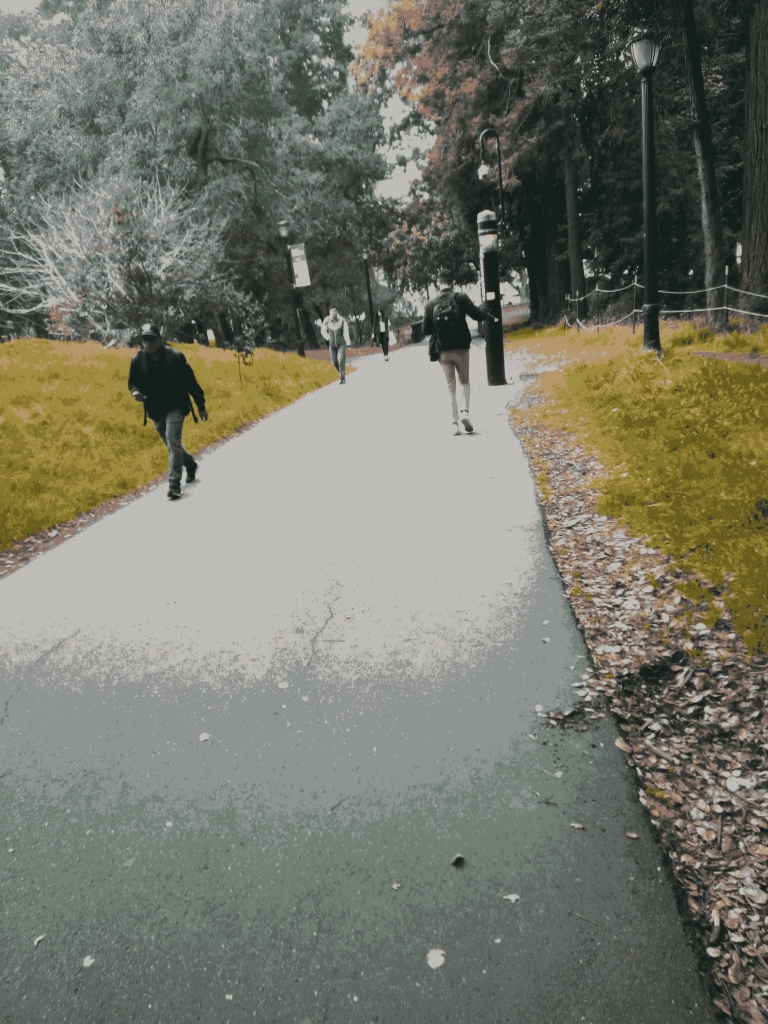 We were talking on another thread about how, if you live in a town for a long time, certain places have memories and associations and ghosts attached to them.

I was walking down this trail on the Berkeley campus the other day, and I remembered walking down that very trail exactly 20 years ago. January 2000. I was 43. It’s a vivid memory. Because I was walking with this crazy tweaker chick who I was madly in love with at the time. So I vividly remember many details of that long-lost afternoon.

It had rained for several days and the storm had finally stopped. The grounds were still wet, and there was moisture in the air and a little drizzle. But the dark clouds were just beginning to part and you could see the first hint of the sun peaking out from just behind the clouds, making for a very dramatic sky with purples and oranges, one of those celestial skies that make you feel like God Himself is shining down from the heavens.

The woman I was walking with was flat and listless. She was recovering from a speed binge. When I ran into her earlier that day she had been slumped on Telegraph, sitting leaning against a building, with a ratty blanket over her head, panhandling. She had just woken up. I offered to buy her a cup of coffee and we took the coffee to the campus, sat on the steps of the Student Union Building as she sipped the coffee and tried to get the cobwebs out of her head.

Then we walked down the trail. She had to go to Shattuck to catch a BART train to meet somebody. We made small-talk as we walked along. She was only 19 and I had only known her for a couple of months. But there was just something about her that strongly attracted me to her. Just one of those crazy things that happens sometimes. She was a sad and tragic person. And she had these big, sad, soulful eyes, like one of those waifs out of a Keane painting. She had run away from home when she was 17, and immediately got nailed by the harshness of the streets. And you could see her going down. But I had this stupid thing where I wanted to “save her.”

Anyways, we walked together side by side down that trail under the celestial sky in a long-gone day in January 2000. Just two of the several billion people on the planet walking under the same sky. . .

But the thing that struck me as I walked down the trail the other day was how FAST those 20 years had flown by. It seemed like only yesterday I was walking down the same trail with the crazy tweaker chick. Well, no. Not really. Not really “just yesterday.” That’s just a cliche. But it DOES seem fairly RECENTLY. When I was living in the world of year 2000. And I still vividly remember that world of 2000. Duncan was still alive. Cody’s Books was still in business. Hate Man was still setting up Hate Camp on Sproul Plaza. And now, all gone

And realizing how fast that 20 years had went by — in a blink of an eye — made me realize how fast the NEXT 20 years will fly by. Probably even faster. Which will bring me to age 83 (God willing) and pretty much the end of the line. Which is coming soon soon soon.