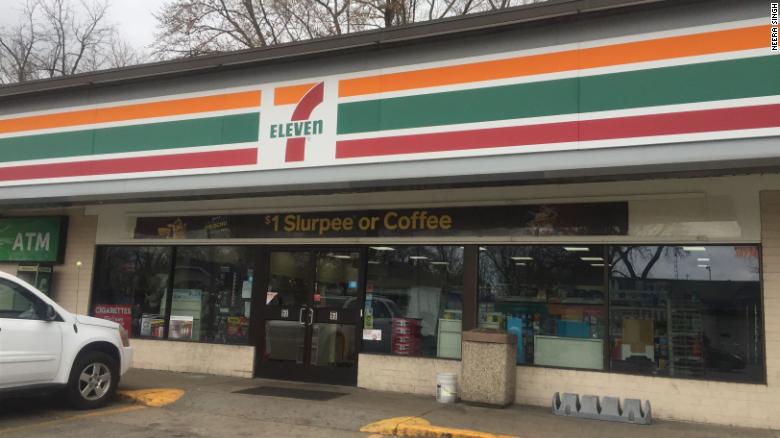 Oh man THIS made my night!!

It’s midnight Halloween night and I really want a beer. Somehow it offends my tender sensibilities to be sober on Halloween night, of all nights. But the problem is, most of the businesses (and liquor stores) on the Ave close early on Halloween night. Things can get a little wild on Halloween so I guess it’s a safety precaution.

My only hope is 7-11. But they’re eight blocks down the road. But I have true grit, so I make a mad dash in that direction. But just as I arrive I see the two employees in the process of locking the front door.

“Are you still open?” I said hopefully.

“Is there any chance I could grab something real quick?”

“OK. But be quick. You can pay me tomorrow.” The cash register is already shut down for the night so he’s giving me this incredible break of fronting me the beer.

I rush into 7-11. Grab the six-pack. “Hurry hurry!!” he calls out. As I rush by him in the doorway I push knuckles in appreciation.

“Come by tomorrow for your change,” he says.

“Keep the change,” I call out over my shoulder as I march towards the Ave. What he did was REALLY above and beyond the call of duty.

Sometimes the gods are just on your side.

This one time, around harvest time, this stoner friend happened to score a big paper bag full of marijuana leaf. The growers basically save the buds and throw out the leaf. But technically it IS marijuana leaf. And if you roll the leaf up into joints you’ll get a grog-like buzz.

But the problem was, the freshly-harvested marijuana leaf was too moist for us to roll up into smokeable joints that we could sell to unsuspecting rubes for a buck a joint (we needed the cash).

So my stoner friend said “Lets take this paper bag full of wet leaf down to the 7-11. We’ll pop it into the microwave and dry it off so we can sell it.”

Well the plan was working great. And the microwave had ALMOST dried out the marijuana leaf. But when we set the microwave for one more heat cycle, the paper bag of leaf burst into flames.

“HOLY SHIT!!” said my stoner friend. He grabbed the burning paper bag of leaf out of the 7-11 microwave. Orange flames and clouds of smoldering black smoke billowing into the air of the 7-11. Not good. So we ran towards the exit as fast as we could, carrying the flaming bag of marijuana leaf to the nearest exit (the stuff was definitely smokeable now), leaving a thick trail of smelly black marijuana smoke in our wake.

We ran out the door and down the street and extinguished the smoldering bag of marijuana in a garbage can. And got the fuck out of there as quick as we could.

The moral to the story? I get tired of potheads always looking down on alcoholics like me. Potheads can be plenty stupid too.

I’ve been thinking lately about some of the stupid things I used to do when I was taking drugs.  Now pot, I can’t think of too many stupid things I did on pot.  Mostly because, when I was stoned on pot, I mostly just sat there in my chair for long stretches of time going “Huh. . . . . ”   But I remember one time.

This friend of mine had just scored this paper bag full of freshly harvested, leafy pot.  Unfortunately it was too damp to actually smoke.  But we were resourceful and diligent potheads and we soon came up with a savvy solution to our dilemma.

“We could go to the 7-11 down the street and stick the weed into the microwave until it’s fully dried,” said my friend.

“A marvelous idea,” I concurred.

The clerk at the 7-11 was distracted by a long line of customers, so we easily slipped to the back of the store and popped the paper bag full of weed into the microwave.  After a minute my friend pulled the weed out but it was still too damp.  “We’ll have to give it another minute,” said my friend.  But it was still too damp after that.  We repeated the process two more times until it was almost smokable.

“One more minute and that oughta’ do it,” said my friend, with a big smile of eminent success.

Well, that last minute made it smokable all right.  In fact the paper bag burst into flames right inside the microwave.

He pulled the flaming bag of weed out of the microwave and whacked the flames out with his hands.  And then he grabbed the smoldering, smoking bag of weed, and we made a mad dash for the front door.  No doubt leaving a trail of pot smoke in our wake.  I’m sure that 7-11 wreaked of pot for the next several hours.

We had moved so fast, I don’t think the clerk even knew what happened until we were out the door and high-tailing it down the street.  But I didn’t go back to that 7-11 for several months afterwards just to be on the safe side.

I swear to God, sometimes my life seems like a very bad Cheech and Chong movie.

I have so many weird scenes at 7-11.  Probably because I go in there 2 or 3 times a night in various stages of drunkenness.

Anyways, the other night this old black guy in a walker was causing a big scene at the cash register.  It turns out some item he had been buying for years, they had just raised the price and he didn’t have enough money to cover it.  So he’s yelling at the clerk (like its HIS fault) and causing a big commotion.

I’m right behind him on line and I just want to get in and out of there as quickly as possible and go drink my beer with no complications.  And I guess I felt a little sorry for the guy because he was old and in a walker.  So I jumped into the middle of it.

The only thing I had was a 10 dollar bill so I gave it to the clerk.  I quickly realized that the old guy wasn’t about to kick in any of his money.  Apparently he felt (or wanted to feel) that I was picking up the whole tab.  He was buying two packs of Camels for $9.50, so the clerk handed me back 50 cents in change.

So now I had a choice.  I could  start haggling with the old guy to kick in his share.  But I quickly realized he was a cranky old fuck and he’d just start causing a big scene with ME if I tried to intervene.  Which was the whole reason I had butted into the situation in the FIRST place, to avoid a scene. So I figured, fuck it, and just let it slide.

But here’s the kicker.  As the old guy was preparing to leave he leaned over to me, and I thought he was going express his gratitude.  Instead he said:

When I’m sober, its usually very easy for me to tell one type from the other.