My drinking has been getting a little excessive lately. So I thought I’d try to go 14 days without drinking. Just to make sure I can still do that. Well sir, I made it through my first night of sobriety last night. But only just barely.

So I’m watching the Cal-Arizona football game at this sports bar (Cal looked good but made crucial mistakes at the end). And I’m not drinking, just watching the game. And after the game is over the guy sitting next to me gets up and leaves. And he leaves behind an un-touched half of a tri-tip steak sandwich on sourdough roll and a big full bowl of beef chili.

Now one of my big credos as an alcoholic is: “Never eat and drink at the same time.” So I almost never eat any food in the evening because I’m usually drinking. But last night I was sober for once. So I figured why not. So I table-scored the food and pounded that sandwich and chili.

So now it’s around midnight and I’m ready for the mile-long up-hill hike to my campsite in the Berkeley hills. Something I handle EASILY every night when I’m drunk out of my mind. But now it’s like I got cement in my shoes. I’m so sluggish I could barely walk. I had to stop and rest 5 times. And I was so tired and sleepy I considered going to sleep right there in a doorway or something. I was on the verge of passing out. I’m telling you that big bowl of chili was like a lead weight in my guts.

It took me an hour to finally stagger up to my campsite where I collapsed in a heap.

I’m telling you. This sobriety thing can be dangerous.

Like a lot of alcoholics I often don’t have the sharpest recollections of what I did the night before. So often, the next morning, it’s like I piece it together by returning to the scene of the crime and searching for clues. For instance:

As I was walking down the hill from my campsite I spotted my discarded beer cup lying on the ground. “Oh right. That’s where I was sitting and drinking my last beer of the evening around 1AM and talking about how my beer gut makes it tough to button the top button of my trousers.”

And then farther down the road: “Oh there’s my 6-pack of beer over there, stashed in the bushes, I hid it there because I didn’t want to carry it all the way up to my campsite.”

And then further down the road: “There’s my jacket draped against that park bench and my headphones lying on the ground. I remember getting rousted by that cop around midnight and I had to pack up in a hurry and accidentally left them there.”

And so on. As I piece together what I did the night before.

And of course my trail of late-might drunken Facebook posts are often awaiting me like an unhappy surprise to be faced in the cold harsh light of morning sobriety.

Generally I’ll start off slowly. I’ll take that first sip of beer around 6 PM. I really don’t like the taste of beer. So I’ll sort of choke down that first bottle like when you’re swallowing bitter medicine.

The second bottle usually goes down a little smoother and a little faster. And tastes better.

By the third beer I usually don’t feel much of an affect. Aside from feeling a little more relaxed and a little less concerned about all the problems that have been beguiling me. I usually have my cellphone (for Facebook babble) and my radio headphones (tuned to ’80s oldies radio station — “The greatest decade!!”). So I’m settling in and getting comfortable for the long haul.

By the fourth beer I start to feel the affect. They call it being “drunk.” But I actually feel mentally sharper at this point. I start getting more excited about things. I usually have several different conversations going on Facebook. And I’m typing away faster and sharper with an almost manic focus on whatever subject I’m dealing with. Most of my website blogs are written at this point. So you can judge for yourself whether my mind is lucid or if I’m one more sloppy drunk.

By the fifth beer things are definitely starting to spin faster. Some sappy love ballad on the radio may cause me to burst into tears. And I might suddenly proclaim to my Facebook friends “I LOVE YOU ALL!! AND I LOVE MY FERAL CATS TOO.”

By the sixth beer I start to reach this wonderful state of mind where I don’t care what ANYBODY thinks of me. Which is a wonderful state of freedom to be in (unfortunately the next morning I WILL care about some of the things I babbled in this state).

By the seventh beer I start thinking I’m a lot smarter than I actually am. And I start making all sorts of sweeping generalizations that make perfect sense at the time. As well as crushing like a bug anyone who dares to challenge my brilliant arguments (again, the next morning I will become painfully aware of some of the holes in my thinking).

By the eighth beer I’ve reached the perfect state of drunkenness. 8 beers times 12 ounces of (7.5% alcohol content) beer equals 96 ounces of beer. So I’m perfectly pickled at this point. And it’s like I have an inner clock in my head that usually says “You’re as buzzed as you’re gonna get. The party is over. Time to call it a night and go to bed.”

But every now and then I can’t resist those ninth, tenth, and eleventh beers. Where I go beyond the 100 ounces threshold.. Usually because I’m having so much fun that I don’t want the night to end. It’s at this point that I can get into trouble. But usually even after the 12th beer I can still talk to a cop coherently and bullshit my way out of any problems.

Everybody who knows me knows I’m not a “morning person.” You wake up on the average with about 300 hangovers per year, you’re rarely in a state of good cheer in the morning.

Plus it’s pouring rain.  And I only got about 4 hours of sleep last night in a cold, hard doorway.  And one of my best friends was hauled off to the hospital yesterday on the verge of death. So I’m ready to kill the next person who looks at me funny (what can I say I’m a little edgy).

Fortunately its 8am and the basement cafeteria in the Student Union Building is completely empty (students are all gone for winter break).

So I take my coffee to the farthest corner of the cafeteria where I can get some much needed peace and solitude and ease my shattered soul into the day.

For whatever reason, in this completely deserted basement, this young maintenance guy picks this exact moment in time and space to come over to my little corner of the Universe and start REARRANGING ALL THE CHAIRS AND TABLES!!! For no apparent reason. They look perfectly fine the way they are.

And as he drags each chair and table across the tile floor THEY MAKE THIS LOUD SCREECHING NOISE!! I mean it’s like a fingernails-on-blackboard kind of sound.  Only much louder.

And so I’m glaring at him (if looks could kill I’d be doing 20 to life right now). Is he doing this on purpose to fuck with me? Or is the Universe conspiring against me for some karmic crime I committed in a previous lifetime?? (Actually, in retrospect, when I sobered up I realized he was just doing his job and I was being an asshole.  So shoot me.)

Whatever. I quickly pack up all my stuff glaring in his direction while muttering Italian cursed under my breath and rush off to the other end of the cafeteria in search of a quiet solitary spot where I’m unlikely to commit any felonies.

And how did your day start?

If they ever have a National Alcoholics Day as a holiday, December 5th would be the perfect day for it.

In fact, the more I think of it, in order to atone for Prohibition (1920 – 1933) I think we need to institute a 13-year period where alcohol is forced on ALL American citizens.  Compulsory alcohol consumption.  For all Americans.  That means YOU.  With severe penalties (fines, jail-time and/or public floggings) for all tea-totalers and sober bastards.  Throw the book at the whole sorry lot of them.  Sure, they can walk in a straight line.  Way to go!  Am I impressed.

So I am pleased to announce the beginning of the Antihibition movement.  Mandatory drunkenness, under penalty of law.

Prohibition was started by the so-called Progressive movement.  And just look where progress got us.

Hell in a hand basket.  So I’m forming the Regressive movement to get this country back on the right track.  Starting with Antihibition.  Sign my petition now.  Let’s get it on the 2016 ballot.  No longer will we allow this country to be degraded and shamed by the doings of the sober minority amongst us.  Down with sobriety!  Up with drinks! 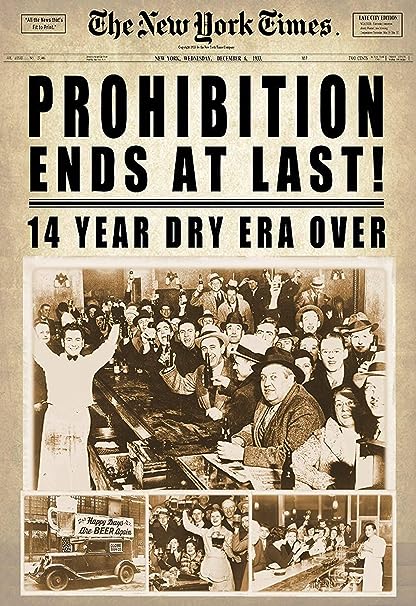