This is a comic strip I did back in 1986 about John calling up Yoko from heaven. On a whim i sent a copy to Yoko at the Dakota, and got a nice postcard back from Yoko thanking me for the cartoon (the postcard was one of John’s doodles of the three faces, John, Yoko and Sean) . . Though for all I know the postcard was actually signed by Yoko’s personal assistant.

One of the problems with doing topical humor:  30 years later I’m not sure if anybody even remembers the comic strips Mama, Hi & Lois, or Beatle Bailey.  Let alone Howard Cosell.

But at least I can be assured people will still be remembering Charles Manson for a long time! 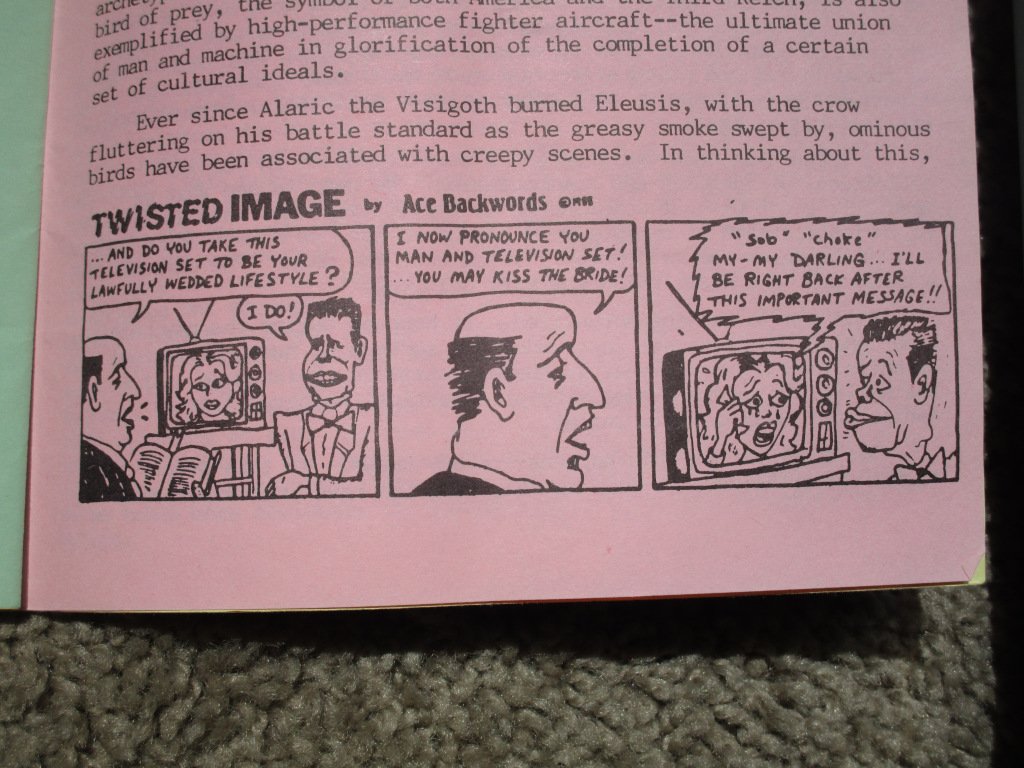 This Twisted Image comic strip from 1988 was reprinted in a Terrance McKenna newsletter. Of all things.  They used to refer to ole’ Terrance as “the Timothy Leary of the ’90s.”  I remember thinking: “Sheesh! Talk about damning with faint praise.”

And for awhile I used to watch the TV show Cheers re-runs every night.  I think I’ve seen every episode. It was a nightly ritual. And after awhile I started to feel like I really knew all the characters on the show, almost as if I was one of the gang, hanging out at the bar.  And I realized I probably spent more time with them than I did with my real friends.

And, of course, there was that nut John Hinckley, who actually fell in love with a movie actress and tried to get her to marry him.

A couple more of my old Twisted Image comic strips that somebody just posted on the internet.

I guess everything ends up on the internet eventually.

In 1986 I finally quit my day job, and spent the next 9 years hacking away at the ole drawing board doing a semi-daily comic strip. This is one of my early efforts. The first appearance of the characters that would later morph into Billy Guzzo and Betty Botty.

I get a kick when somebody posts some of my old cartoons on the internet.  Most of this stuff I haven’t looked at in 20 years.  All my stuff has been packed away in storage lockers for decades.  So most of the stuff I’ve forgotten all about.  Most of the time I can’t even remember what the punchlines were.  So now when I’m reading them, I’m reading them just like the audience.  Where I’m not sure what’s coming next.  Which is a weird experience.  It’s really as if these things were drawn by somebody else.  In another lifetime . . . And in a way, they were.