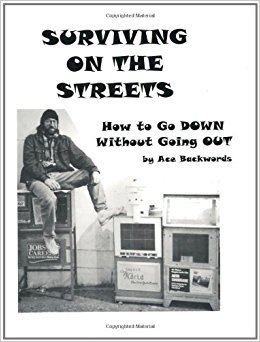 I distinctly remember where I was on 9-11.  My Surviving on the Streets book had just been published the day before.  And I would turn 45 on the day after.  I considered my Street book one of the best things I had produced.  So I felt I was on top of my game back then. With new peaks yet to come.

And the Telegraph Street Calendar was a hit that year, too.  It was the one with Hate Man and Hatred on the cover. It sold well. And it recaptured a bit of the zany, fun-loving spirit of the Telegraph Avenue in the early ’90s. So that was looking up, too.

Everything I touched worked.  And I’d been doing daily kundalini yoga meditation for 7 years years.  With no drugs or alcohol. So I was sharp as a tack, both physically and spiritually.  It even seemed like I was finally resolving some of the demons that had bedeviled me all my life.  And I was actually turning into the person that I had always wanted to be. So I really felt like I was on a roll.  And I had every reason to believe things would just keep getting better and better.

And my little sister, at age 42, had managed to finally have her first child. So it was a new beginning for her. So that’s what I always remember about that period of 9-ll. The birth of my sister’s baby, and the birth of my “Surviving On the Streets” book. It seemed like things were really looking up on all fronts. . .