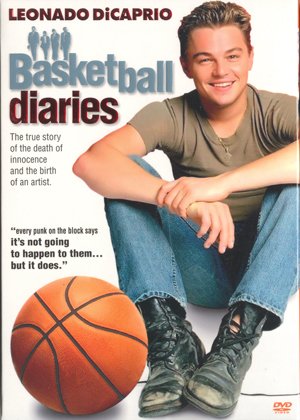 I don’t know why I’m still pissed off about this. Maybe because “Basketball Diaries” was one of my favorite books.

But Hollywood? Here’s a tip for you. If you want to make a movie about a kid who was an all-New York City High School basketball All Star player. A guy who thrived on the playgrounds of New York City where some of the greatest and wildest basketball in the world is played. You can’t hire an actor who looks like some suburban junior high school putz who has no game, is slow and flat-footed, and looks like they have lead up their ass, to portray them in a Hollywood movie called “Basketball Diaries.” You just can’t.

In one interview Jim Carroll talks about some of the high school battles he had on the b-ball courts with Calvin Hill — an incredible athlete who went on to be an All Pro NFL running back for the Dallas Cowboys (and who’s son Grant Hill was an NBA superstar).

During one game Calvin Hill — who was built like a bull — was charging down-court full speed on a fast-break. With Jim Carroll running alongside him all the way in hot pursuit. When Hill went up in the air for the slam dunk, Carroll leaped up with him and pinned the ball against the backboard and they both crashed into each other in mid-air and went sprawling end-over-end into the stands.

If Leonardo DiCaprio had tried to step in front of Calvin Hill he would have been crushed like a bug and probably sent to the hospital.

Jim Carroll was described as having the raw sexuality of a cheetah on the prowl. Leo DiCaprio was described as having the raw cuteness of a guy in a boy-band. Jim Carroll was a guy you might find shooting up heroin in a back-alley with Lou Reed. Leo DiCaprio was a guy who’s poster you’d find hanging on the bedroom wall of a 12-year-old girl. For crissakes, the dude doesn’t even have a JUMP SHOT!!

We were talking about the “Basketball Diaries” movie last night. One of my favorite books. I haven’t seen the movie, just some YouTube clips, but it looks horrible to me. They didn’t even come close to capturing the feel of the book. Maybe it works as entertainment in it’s own right. But as an adaption of the book it’s all wrong.

First of all, the period the book was written — the mid-1960s — is a crucial aspect of the book. And WHY they would film it in the present is unforgivable. One of the things that made Carroll’s book so compelling was that he was like one of the first of the ’60s street hippie types. Way ahead of his times in that way, and a pioneer in a strange way, exploring unchartered waters. He was like a prototype for what would come later. Also the Cold War and being of that first post-nuclear bomb generation had a crucial effect on Carroll’s psychology and subsequent behavior. Of course all those nuances are totally lost by setting the movie in the present.

Also, Leonardo is all wrong as Carroll. Though he bares some resemblance facially, he’s way too baby-faced for the part. The key to Carroll’s hipster appeal was that he was mature WAY beyond his years. A fast-talking, sharp-talking classic New York street kid, with a gravitas far beyond his years. A man among boys. While Leonardo looks like he’s still in junior high school. And Carroll, physically, was long and severe and bony. And a natural athlete with the gait of a panther. A guy who instantly rivets one’s attention. Whereas Leonardo seems to fade into the background of every scene I’ve seen.

And — worst of all — Carroll was a city all-star at basketball, a flashy Pete Maravich type of player who could light it up for 30-plus points. And we’re talking New York City playground basketball. Some of the slickest, wildest ball in the world. And Carroll could run with the best of the brothers. He played against guys who later went on to be stars in the NBA. While Leonardo plays like some putz from the suburbs. You can see from the basketball scenes that Leonardo has no game. He’s slow and flat-footed and pedestrian. And I’m sure they had to work all sorts of editing tricks just to give him any semblance of an actual hooper.

But what I don’t understand. When You got a great book, a classic book. with scene after scene of incredible scenes. Why would you want to change ANYTHING? Or add ANYTHING?

Fucking Hollywood. How they manage to sell this stuff to the public is truly beyond me.

The other night while I was watching the Warriors game at this sports bar, this guy sidled over to my table.

“We should get back out there on the court, bro,” he said with a smile. It was Kenyati, a guy I used to hoop with at Ohlone Park back in the day.

“How old were you when you stopped hooping?” said Kenyati.

“I remember the last time you were out there,” he said. “I was there that day.”

“And you were a teenager back then,” I said.

We gave each other wistful looks. And then went back to watching the Warriors game.

Those days running full court with the brothers were some of the best days of my life. And probably Kenyati’s, too.

I’ve turned into a total recluse lately. I’ll go 2 or 3 weeks without talking to anybody. Today I went to the park, and I was shooting hoops by myself as usual, when these three little kids came up and asked if they could play with me. Ages 5 , 6 and 7, I’d guess. I said sure

We went two-on-two. It was a helluva’ game and I got in a good work-out (I sweated off two pounds). Most fun I’ve had in a long time.  They were small, but really quick.  I had a hard time keeping up with them.  After the game ended we all high-fived. . . . Though I’m still slightly pissed my team lost 10 to 8 .

They were too small to dribble the ball much. They mostly just ran with the ball (I was a big enough man not to call double-dribble on them). But this one kid could really shoot. He was deadly accurate from about 2 or 3 feet from the basket. They must have been in the 1rst or 2nd grade. The kid on my team, he was the smallest and maybe was still in kindergarten. So we were at a disadvantage. But I think if we get a rematch we can take ’em next time!

I was trying to show off by shooting 20 foot jumpers. I had been nailing them consistently earlier when I was warming up by myself. But during the game I kept throwing up bricks. Guess I choked when the pressure was on. But in my defense, its the first actual basketball game I’ve played since 1993. So I was a little rusty.

Those kids, they really reaffirmed my faith in humanity.  There’s just something so pure about kids.   They remind me of my feral cats.