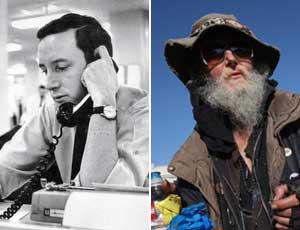 Over the years Hate Man systematically developed this whole philosophy — this whole way of life — that he dubbed “Oppositionality.”

It all started around that fabled year of 1969, when Hate Man was around 42 and he got hit by a massive mid-life crisis. Up to that point Hate Man had lived a fairly normal, conventional life, and had done all the things the way society had told him to do it. And by most measures he was a “success.” He had a prestigious job, the wife, the kids, the nice home, the whole bit. Except for one thing: he was miserable.

So he started “nutting” up, as he put it. Playing by society’s rules hadn’t worked. So he starting questioning everything society had told him. And doing the exact opposite.

After he got hit by a car chasing after a frisbee in the middle of the street, and ended up in the hospital for several months with his leg in a traction, Hate Man decided that maybe society had gotten that one right. So from that point on Hate Man always looked both ways.

And that’s pretty much how Hate Man developed his unique and peculiar philosophy. By trial-and-error.

So I guess you could say he developed his philosophy more experimentally than ideologically. If something worked, he kept it. And if it didn’t work he tossed it out.

2 thoughts on “The secret origin of Hate Man’s philosophy of Oppositionality!!!”