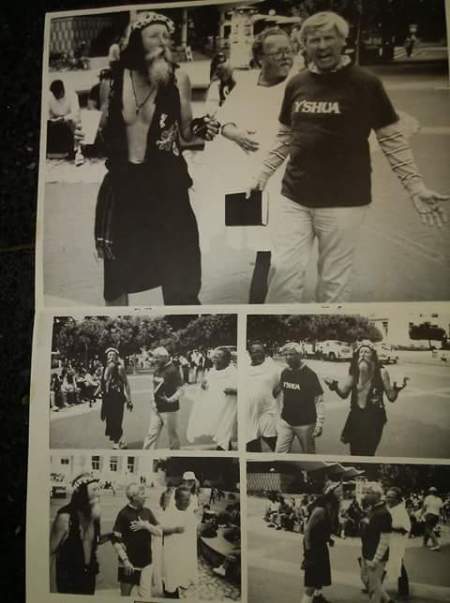 Hate Camp went through two distinct phases during the years I was hanging out with Hate Man. The Sprout Plaza years. And the People’s Park years. And i spent about 12 years hanging out at one, and 12 years at the other.

During the Sprout Plaza years, Hate Man mostly hung out on the Berkeley campus. So the scene was more intellectual. There were always some college students and academic types hanging out. As well as some normal mainstream types. Along with the band of street crazies. It was more of a light-hearted, playful, artistic scene.

Whereas the People’s Park years, it was mostly hardcore street people hanging out at Hate Camp. So it was a bit grimmer, as well as more wild, violent, and volatile.

During the Sproul years Hate Man often seemed like a public performer. And the campus was his stage to enact his unique street theater. He’d usually hit the scene every morning wearing brightly-colored clothes — like a stage costume — with his trademark skirt and bra, and adorned with lots of cheap jewelry and flowers in his hat. He was very flamboyant, and a commanding performer, enacting his strange (and loud) public dramas. And always one of the more popular figures on the campus.

But during the People’s Park years he toned his act way down. Went back to wearing pants instead of skirts, and mostly wore black or gray. He was much more in a purely survival mode then. Though he always had a unique style. It was like he went from the centerstage of the town of Berkeley, to a back alley on the fringes. (Things were a lot easier during the Sproul years. We spent most of our time playing. During the Park years Hate Man was much more preoccupied with all of his survival issues — dealing with the constant pressure from the cops, the wingnuts, the weather, his health, all of his stuff. It was like a constant chess match for Hate Man.  Always angling to stay one step ahead of these forces.)

Another big difference. During the Sproul years he was usually surrounded by 8 or 10 hardcore devotees. “Oppies,” he called them. People who followed his philosophy of Oppositionality on a daily basis, and looked at Hate Man as sort of a guru or role model.

But during the People’s Park years, there was usually only one or two Oppies, at most, hanging out at any given time.

I was a bit more distant from Hate Camp during the Sproul years. Because Hate Man was primarily devoted towards his faithful Oppies — or proselytizing to get you to join the fold. And I was on my own personal spiritual/philosophical trip.

But I got much closer to Hate Man during the People’s Park years. Because I was homeless myself at that point and living along side him for a decade. And you know what they say; “You don’t really know a person until you live with them.”

But probably the biggest difference between the two periods:

During the Sproul Plaza years, Hate Man was usually surrounded by a solid group of people. Wiith a handful of street wingnuts circling around him from the outskirts.

Whereas during the People’s Park years. Hate Man was usually surrounded by a hardcore group of street wingnuts. With a hand full of solid people circling around him from the outskirts.